Michael Bautista ended being at the Black Lives protest in Dallas when the shooting started..........he stayed in the city and continued filming, posting to his Facebook page. Because it was late at night in the USA, MILLIONS of people aroundthe world ended up viewing this. The next thing you know, CBS, CNN, and FOX wanted to interview him because he go better footage than they did.

Most of the readers and You Tube viewers do not believe that the event was real, calling it a False Flag event.

Camilles Reels1 hour ago
I say it was a 'false flag' operation and that professionals did the sniping, and they purposely killed a man and later blew his body up so that a "dead man could tell no tales". This was done so that the Republican and Democrat conventions can now be armed with military-like police forces. You KNOW this is true. 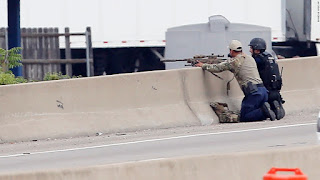 Dallas Police Officers say there was more than one sniper, using parts of downtown Dallas as a kill zone for the sole purpose of targeting and killing police officers.  email us at  info@thetruthdenied.com