Earth Shifting with 20 Earthquakes in 2016; Talk of Pole Shift & related to chemtrails

Earth Shifting with 20 Earthquakes in 2016; Talk of Pole Shift & related to chemtrails 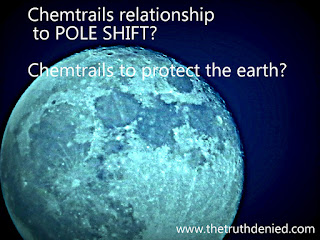 ·           Magnetic north has shifted 248.548 miles in 10 years and  continues to accelerate.
·           Increased global volcanic activity in 2016, including mysterious Yellow Stone Park’s recent “off-line” activity.
·           The largest volcano in the world, Mauna Loa (Hawaii) projecting 13,677 feet above sea level, its top being over 30,000 feet above the deep ocean floor, has been erupting for over 30 years continuously.
·           In 2016, The Defense Contract Management Agency allocated over 6000 billion dollars to provide the Department of Defense (DoD) with capabilities not found in the Component Services, or anywhere else within Government.
·           2015 , Kīlauea Volcano breaks out of theEast Rift Zone, where surface lava flows are active northeast of the Puʻu ʻŌʻō vent, an event that has not happened this close to the ocean in over 400 years.
·           Increased Earthquake activity in the Ring of Fire.
·           USGS and NASA reported a new magma chamber beneath Yellowstone National Park that is 11 times the volume of the Grand Canyon. Concerns of a magma release that would destroy the entire North American continent as well as trigger new ice age in its wake.
·           Mystery Booms thought to be caused by the earth’s core, signaling an inevitable instability of earth’s core.Fisherman report loud sounds coming from the ocean/some describe as screeching while others report train like noises under the ground.
·           Increase in the intensity of solar winds causing CMEs that  have a stronger outbound effect on earth increasing radiation which is heating the planet.
·           Earth’s magnetic field is decaying rapidly, signaling normally redirected materials to actually enter earth’s atmosphere causing more instability. It is reported that earth’s magnetic field was weakening 5% per century, but now is weakening 5% per decade.
·           Radiation Storms, including geomagnetic storms and solar flares (CME) interrupt HF radio communication.This has become a global concern.
·           Geoengineering (SRM) being sprayed as a possibility to slow down the heating of the planet; program has been extended world wide.

Posted by The Truth Denied at 4:37 PM No comments:

If  you have not seen this, it is one of the most effective instructions on what is happening to global money................it is accurate and full of facts, easy to understand! Please pass it around!
Posted by The Truth Denied at 12:46 PM No comments:

Posted by The Truth Denied at 5:10 PM No comments: